Known as the ‘Young Imam’, Sabah Ahmedi is on a mission to change false narratives about Muslims by being relatable and making people laugh

Known as the ‘Young Imam’, Sabah Ahmedi, born and raised in Manchester, decided aged 17 that he wanted to dedicate his life to the service of Islam by becoming an imam. After seven years of training, Ahmedi has been an imam for three years and has won awards for using social media to challenge stereotypes and misconceptions about who an imam is.

Fresh off a visit to New York to wrap up a project with the UN on countering Islamist extremism, Ahmedi speaks to Reader’s Digestand discusses Islamophobia, portrayals of Muslims in the media and why it is on a mission to change people’s views of Islam.

DR: First of all, for those who don’t know, what is an Imam?

An imam is basically a priest, but a Muslim version. You have it to keep it soft and not get too technical [laughs].

Why did you choose to become an Imam?

When I was younger, I aspired to join the police like my father, become a teacher like my mother, or become a doctor or a lawyer. But at 17, I decided to give my life in the service of religion, and I honestly feel that it was through the prayers of my elders and my parents, and the blessing of God that I really I decided that was what I wanted to do.

People think an imam is someone middle-aged with a massive long white beard, serious and no joke. So I’m just helping people know that an imam is also someone you can relate to.

Do you think Muslims are misrepresented in the media?

Yes. A third of Britons think Islam threatens their way of life. Unfortunately, there are a minority of individuals who have tarnished it for the majority [of Muslims].”

Attributing a terrorist attack or violence to a religion is not true because no religion preaches violence and terror. So [in my opinion]religion should be removed from all media reporting when terrorism and violence are involved…and sadly [the media] has a huge role to play in why people are afraid [of Muslims]. So we have to change that…

I think we live in a time where conversation and dialogue needs to happen, and that’s why I work on social media as a “young imam”, just to give people a safe space to ask questions and see what life is like for a young Briton. Muslim, and as a father.

How do you demonstrate through your work and your life that the fundamental meaning of Islam is peace?

It’s fine when we say “Islam means peace”, because it is. But we must show by our own example and our actions that Islam really means peace. So on my Instagram page, every day I put a reel talking about an Islamic teaching or helping and motivating people to be the best version of themselves or to reconnect with God.

Through my Instagram stories, I talk about helping her neighbor, dropping off food [to them]by taking out your neighbour’s garbage cans.

It’s just the smallest things that I try to connect people with. Islam teaches that when you prepare food at home, do a little more and give it to your neighbour. So I’m just trying to help people connect on our common denominators because once they do it will help eliminate misconceptions and help them see that in fact Islam is a religion decent.

I could have a beard, and I could [have] another [skin] color to someone else, but as human beings we all share common values; spread love, help people. And I think sometimes we judge people by the way they look, when in reality we’re all the same on the inside. Every religion teaches unity in God, fulfilling the rights of God and the rights of his people.

And once we can unite on that, we can get rid of a lot of the fear that people have.

What do you think of the obligation imposed on prominent Muslims to publicly condemn any act of terrorism or Islamist extremism?

Look, I can’t speak for anyone else, but as a Muslim, if the boat sinks and I jump, what good am I? Get on board and get rid of the water. As an individual and as a Muslim, I try to help people learn about Islam and eliminate misconceptions.

What they see on TV, the attacks they see and the injustice they see that is done in the name of my faith—I help counter them by inviting people to my mosque, helping them see what life is like as a Muslim, showing them how we pray, eating with them. So when they see [terrorist attacks reported on] TV, they’re like, ‘wait i met a muslim i been to a mosque i know what the teaching is about that.’ 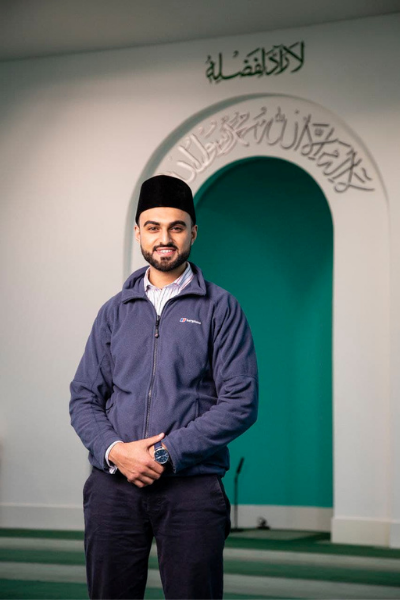 Does it frustrate you that when there is a terrorist attack carried out by a different religion or in the name of white supremacy, it is reported differently?

It’s a double standard. When there is a [Muslim] author of an attack, his faith is blamed, and when someone is not [Muslim]mental health issues are implicated.

Have you ever been in situations where being a Muslim has been a problem?

Sure. We have [me and my wife] they threw glass and stones at us.

My wife Melissa converted to Islam when she was 13, and she’s a white British convert, and she wears the hijab. We had issues on the Tube, where people watched and talked. I ignored it several times and the third time I was like “guys, if there’s a problem, let’s talk about it”.

And these two middle-aged men said, “No, we’re not looking at you, we’re looking at somebody else.” But there was no one else in the subway. They got off at the next station and were clearly surprised that I challenged them. It was still respectful.

My wife has the funniest looks, like me, being a brown Asian male, [I] forced her to convert and wear a headscarf where she doesn’t. My wife is a very strong and independent high school RE teacher. She chooses to wear a headscarf and it is entirely her choice.

“As an individual and as a Muslim, I try to help people learn more about Islam and eliminate misconceptions”

There seem to be a lot of misconceptions about why women wear hijab. What has been your experience in combating these prejudices?

I have met people who said their problem was that the niqab did not allow [Muslim women] to integrate into society.

Their problem was that it did not allow them to integrate into society. I said, “I’m sure you walked into that cafe with a mask on?”

They said their problem was that the color of the veil was black. So I said, “You’re wearing a black top.”

I then asked her: “Are you a feminist? and she said yes. So I said, “Then why can’t you let [women] wear what they want to wear?” and then I asked, “Have you ever met a woman wearing the niqab or the hijab?” She said no.

I said, “Why don’t you come to the mosque, meet one and talk to him?” She never came.

What do you enjoy most about being an imam?

Oh man, I love meeting people. I love connecting with people, chatting about life. It’s good to have an impact on people and to help them.

People find it very easy to talk to me, many people have spoken to me about drug addiction, domestic violence, suicidal thoughts. And I feel pretty happy that they can trust me in that sense. And a lot of them aren’t even Muslims, but they feel like they can talk to me.

I just try to help them through my own experiences in life. And as a member of my own community and as a religious leader, it’s important to be there for everyone. This is what Islam teaches you to do.

Just because someone is different from you [it] does not mean that we do not share the same values.

Read more: Jordan Stephens: If I Ruled the World

Read more: Ayisha Malik on life as a Muslim in the West