A new survey has found high levels of Islamophobia in the UK, with 25.9% of respondents viewing Muslims in a negative light.

The survey, conducted by the University of Birmingham in conjunction with YouGov, questioned 1,667 people to find out their views on different religious and ethnic groups.

“The aim was to map the extent of Islamophobia in British society and provide better data on it,” Stephen Jones, a senior lecturer at the University of Birmingham, said at the report’s launch. What we have done “is new and almost unique… [to] contrasting different religious and ethnic groups… around the wider discourse around Islamophobia in the UK,” he said. Muslims make up around 5% to 6% of the UK population.

The report “The Dinner Table Prejudice: Islamophobia in Contemporary Britain” by Jones and Amy Unsworth examines prejudice against Muslims as a group of people and Islam as a belief system, and showed how these two varieties of Islamophobia appear differently in British society.

The report’s title was taken from a 2011 statement by former Conservative chairwoman Baroness Sayeeda Warsi when she said Islamophobia had ‘passed the dinner table test’ by going beyond extreme positions towards greater respectability of the middle class.

The report mirrors this claim, noting that while “hostility towards ethnic and religious minorities, including Muslims, tends to be more common among politically conservative, nationalist and lower social class people,” the survey found. shown that “prejudice toward Islam and its teachings does not follow this pattern. This prejudice is more evenly distributed among political groups and more prevalent among the educated middle classes.

Muslims are the second ‘least liked’ group in the UK, after gypsies and Irish travellers, with 25.9% of the UK public feeling negative towards Muslims (9.9% feeling ‘very negative’), against 8.5% for Jews, 6.4% for blacks. people, 8.4% for whites and 44.6% for gypsy and Irish travellers.

The survey also debunked sensational claims made in the UK media that parts of the UK are subject to Sharia law and are ‘no go zones’ for white people. The report noted that “more than one in four people, and almost half of conservatives and leave [the European Union, Brexit] voters” had “opinions about Sharia ‘no go areas’: 26.5% of Britons agree that ‘there are Sharia areas in Britain where non-Muslims cannot not enter”. This figure rises to 43.4% among conservative voters and left-wing voters. In addition, 36.3% of Britons, and a majority of Conservative (57.3%) and left-leaning (55.5%) voters, also agree that “Islam threatens the British way of life”. “.

“The electorate really buys into this conspiracy theory [about Sharia ‘no-go’ areas]”Jones said.

The survey showed that “those who attend religious gatherings and believe in God are less likely to view Muslims negatively than people who do not do these things. Some 23.5% of “believers” have a negative opinion of Muslims against 29.8% of “unbelievers”.

In an open-ended question on which world religion has a more negative impact on society than others – answered by 20.3% of the total survey sample – 64% named Islam as the religion “ the most negative. 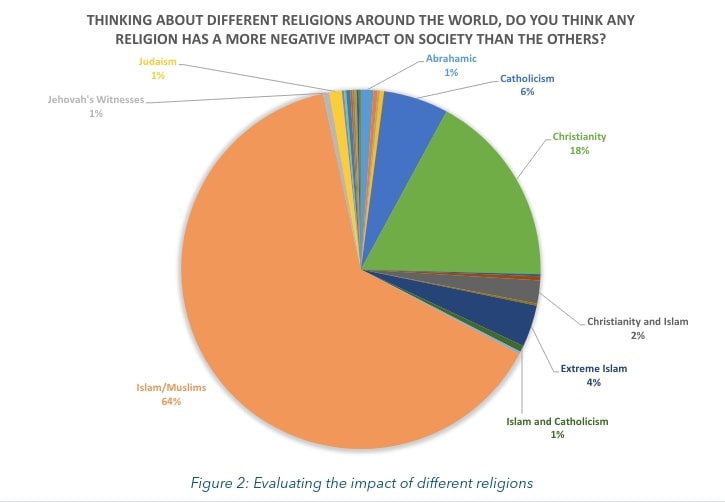 The study uses a definition of Islamophobia that includes racism. “What our data suggests is that, because religion is not subject to the same social sanction as remarks about race, culture and discrimination, narratives about Islam as a belief system allowed middle-class liberal participants to express their anxiety about Muslims without fear of censorship,” the report states. “Among conservative, libertarian, or populist respondents, stereotypes about Islamic belief often went hand in hand with cultural otherness and sometimes overt racism.”

The study follows a December report titled “British Media Coverage of Muslims and Islam”, which found that almost 60% of online media articles and 47% of TV clips associate Muslims or Islam. Islam to negative aspects or behaviors.